Well its been a very exciting 4 months for me career wise as I got offered a full time teaching job at my local college in March :) Unfortunately it did mean my already limited hobby time had to take another back seat whilst I got settled in to my new job and completed my initial teacher training.

Last month I finished my 'certificate to teach' course which I started back in October, which means I've got back a couple of hobby nights :)

And all this teaching talk brings me quite nicely onto the subject for this blog post!
The 'University of Transmortis' box set from Wyrd games for use with the game 'Malifaux'. Which I purchased sometime last summer!

The box set contains 4 very highly detailed plastic zombie/construct models (+rules for a some special story scenarios, including a sol play mission). Its worth noting (for people that want to use these models in their games) that the character cards that come in the box, have fairly recently been superseded by updated cards following recent beta testing.
Link to updated character cards

First on the painting table was the
'Student of Steel' 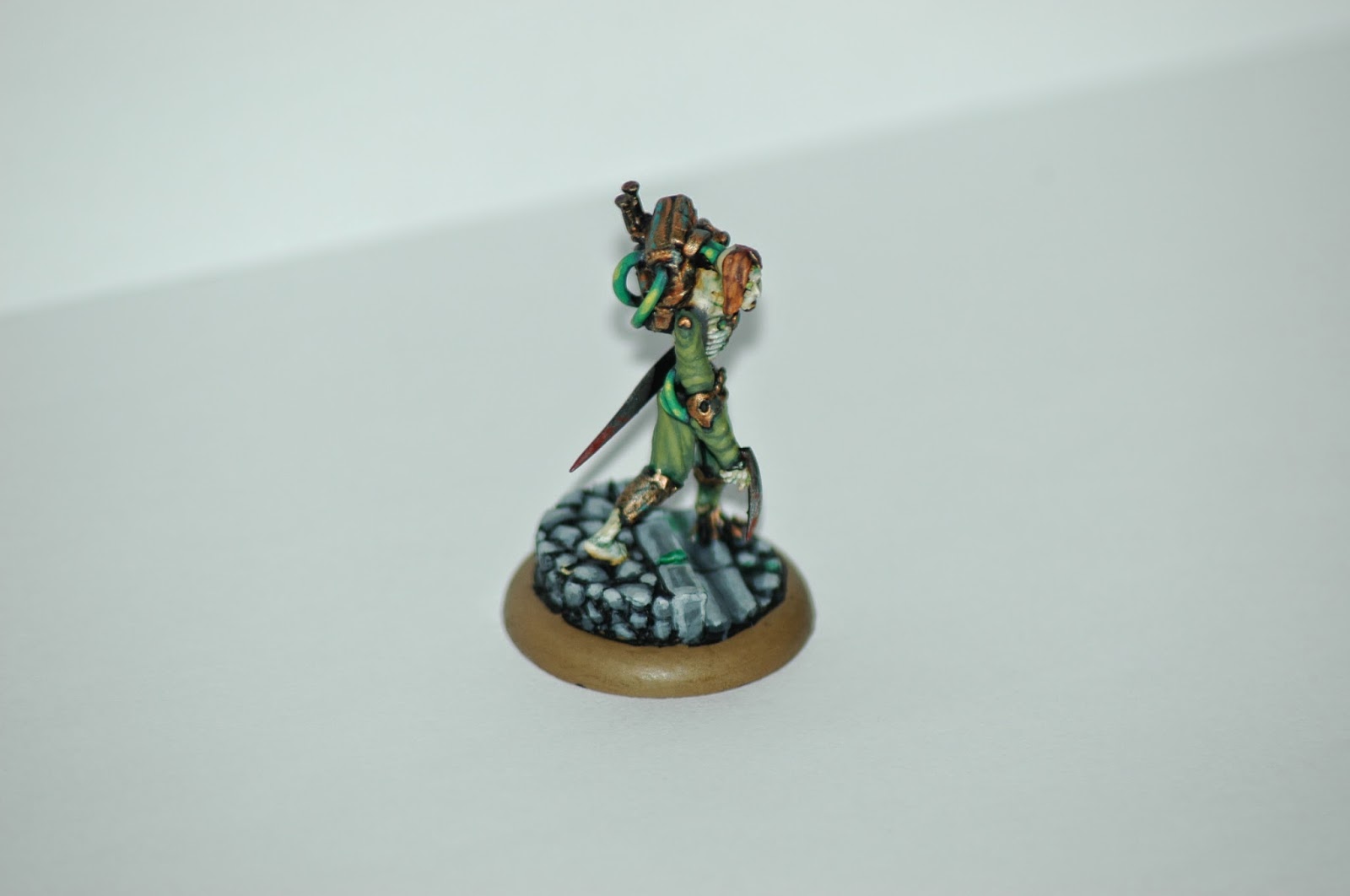 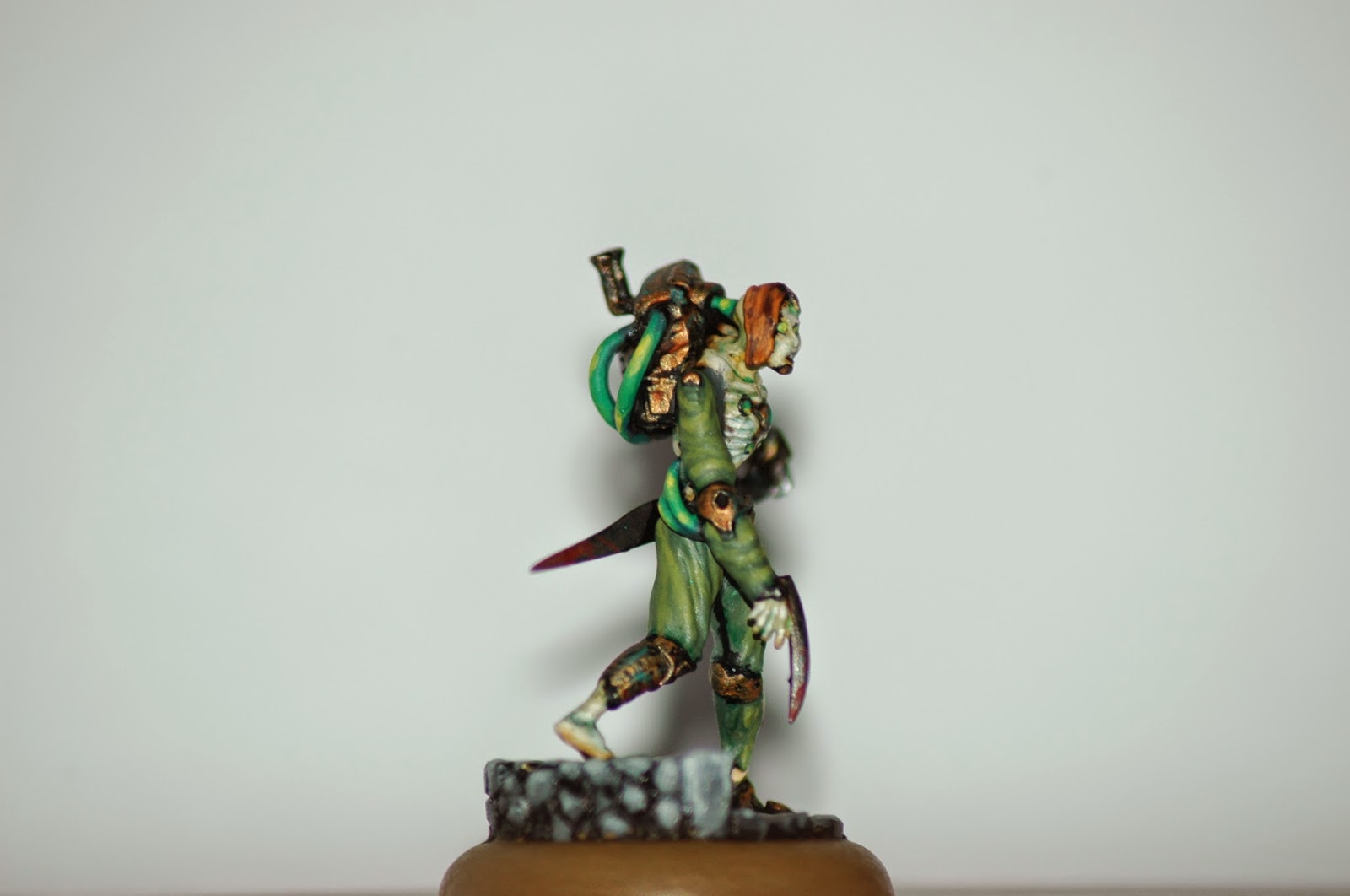 For this group of models I wanted to use a palette based around copper/brass and the perfect match was green, which I could use to tone the zombie skin and also incorporate filigree on the metal sections.

Because I am going to be using these models almost exclusively within my 'Molly' crew I decided to use the 'Necrotic machine' model which first featured on this blog back in
March 2012!, as a reference model. I started as always with the skin on the model, and as I have done for all my zombie models painted I started out by painting up a standard flesh tone, before applying a watered down green ink wash and then bringing the highlights back up by using a very watered down light flesh, so that the green still shows through.

After completing the flesh I moved on to the green clothing and then the metallic areas, which again received a watered down green wash, followed by a slightly thicker application of 'light green' on some of the raised edges which I wanted to get the filigree effect.


Overall I was pleased with the finished model apart from the hair which I feel cold have been better, but I was keen to get painting more models, so I put the student to the side and moved onto the other models in the box.

For all the other models In the box I used the same colour palette and techniques apart from those which I describe below.
Note: apart from the odd pot of GW paint still going strong from the late 90's! I almost exclusively paint using the 'Vallejo' range of paints. 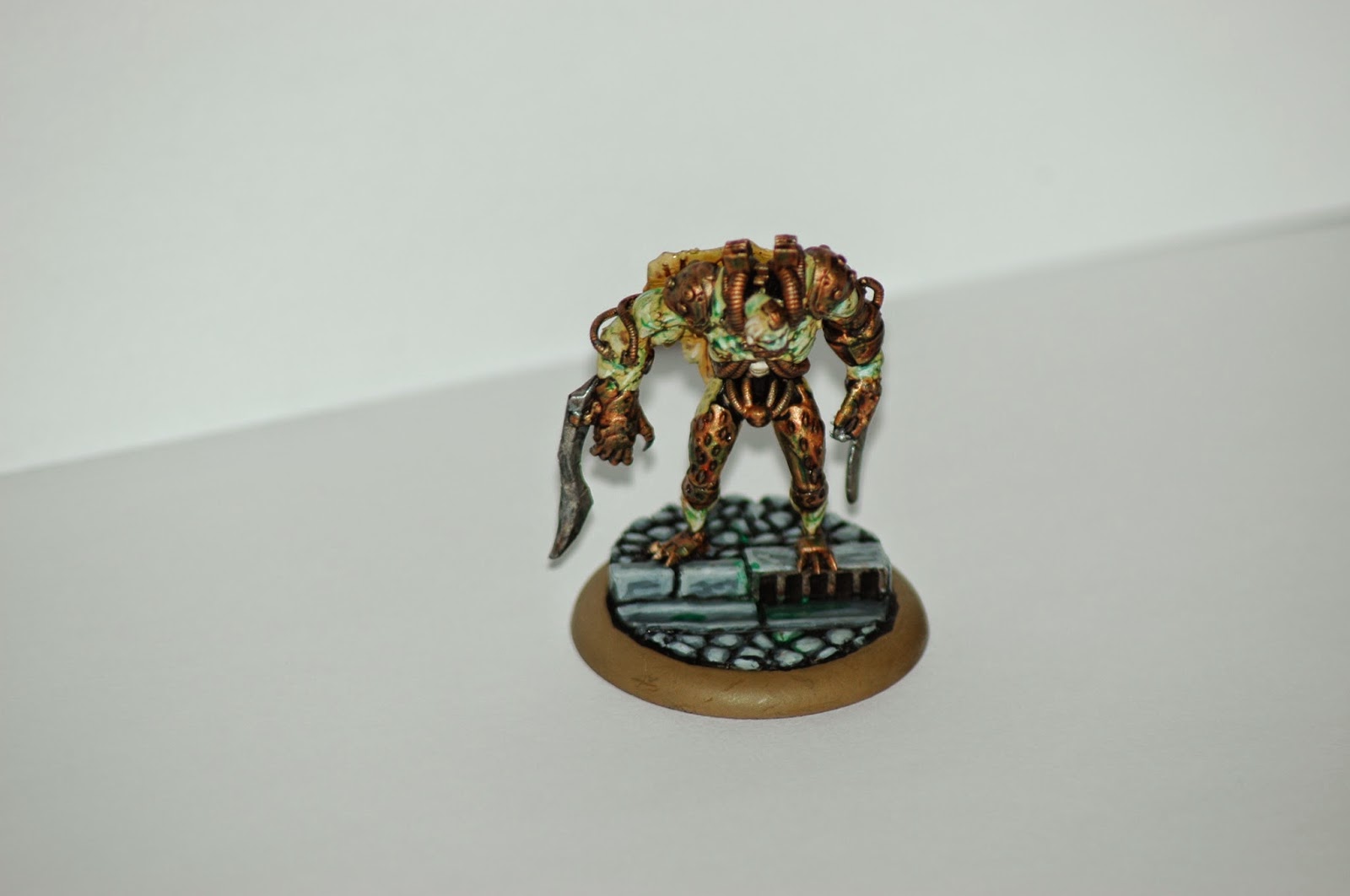 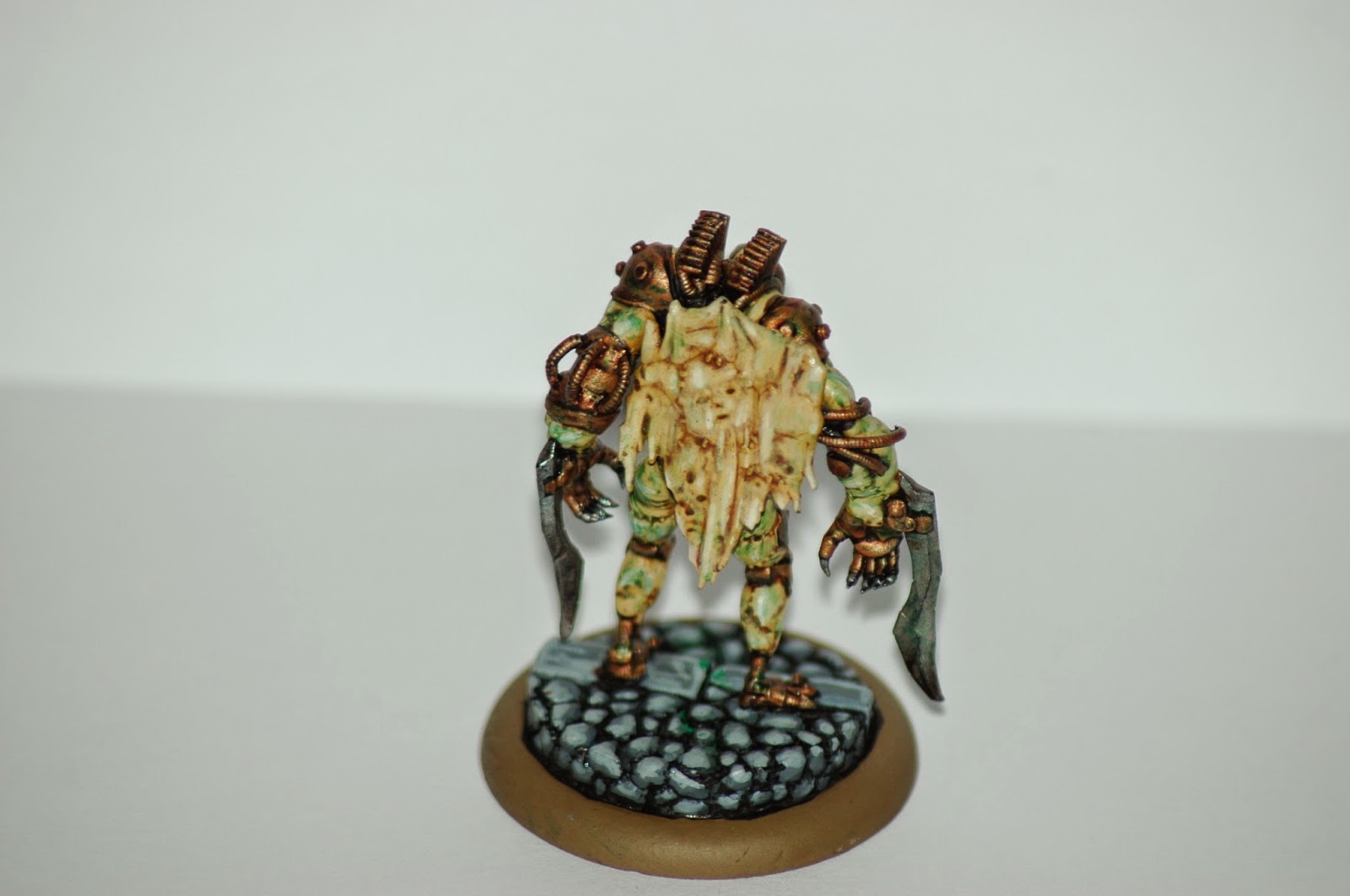 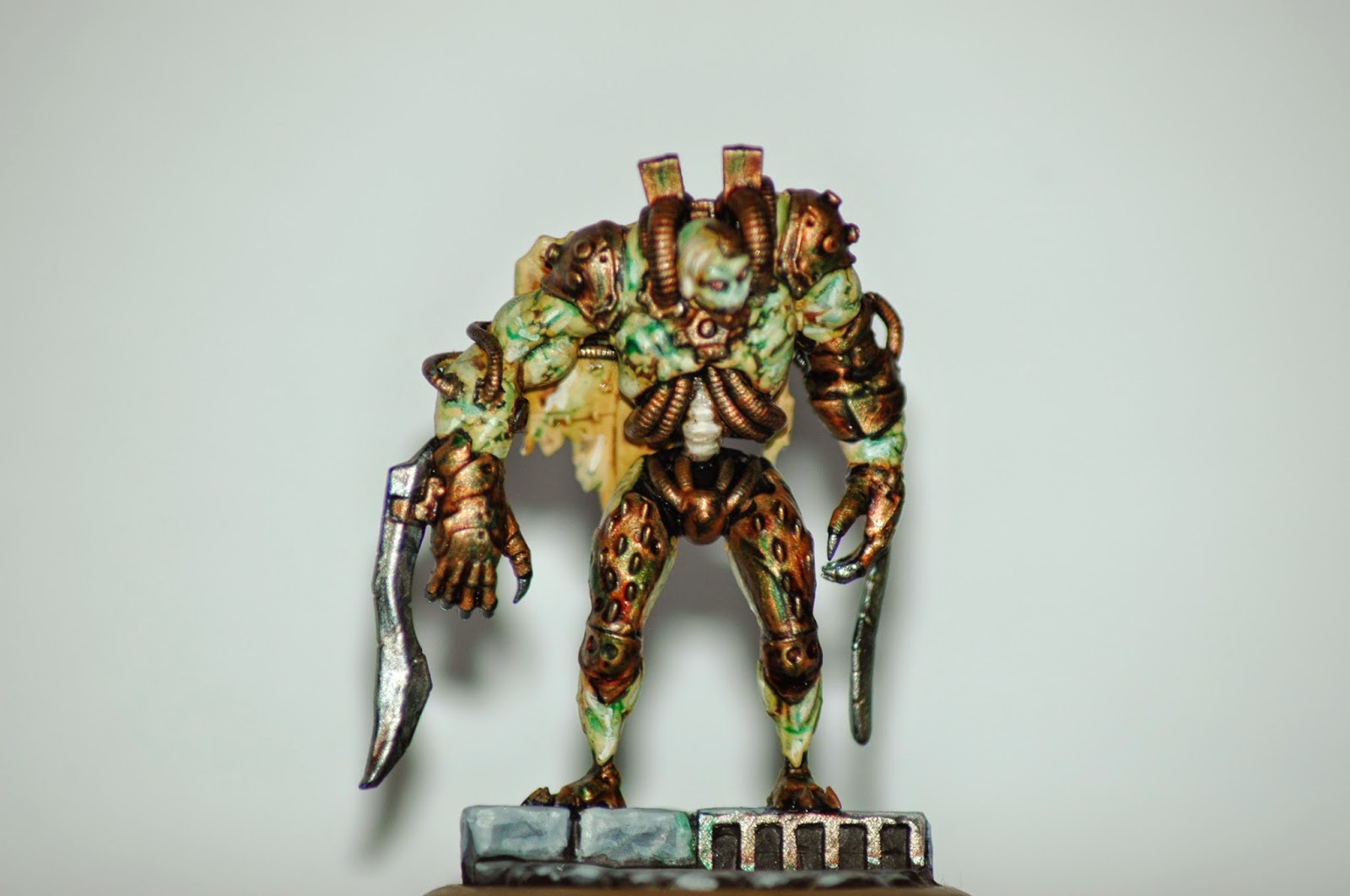 The main stand out feature on this model is the fairly gruesome looking flesh cloak attached to the back. For this part of the model I ensured I avoided giving the cloak the green wash, and lightly applied some green to just small sections. Overall I think the effect worked very well, which was a bonus because I was confident enough to create the same effect on a much larger area, on one of the upcoming models. 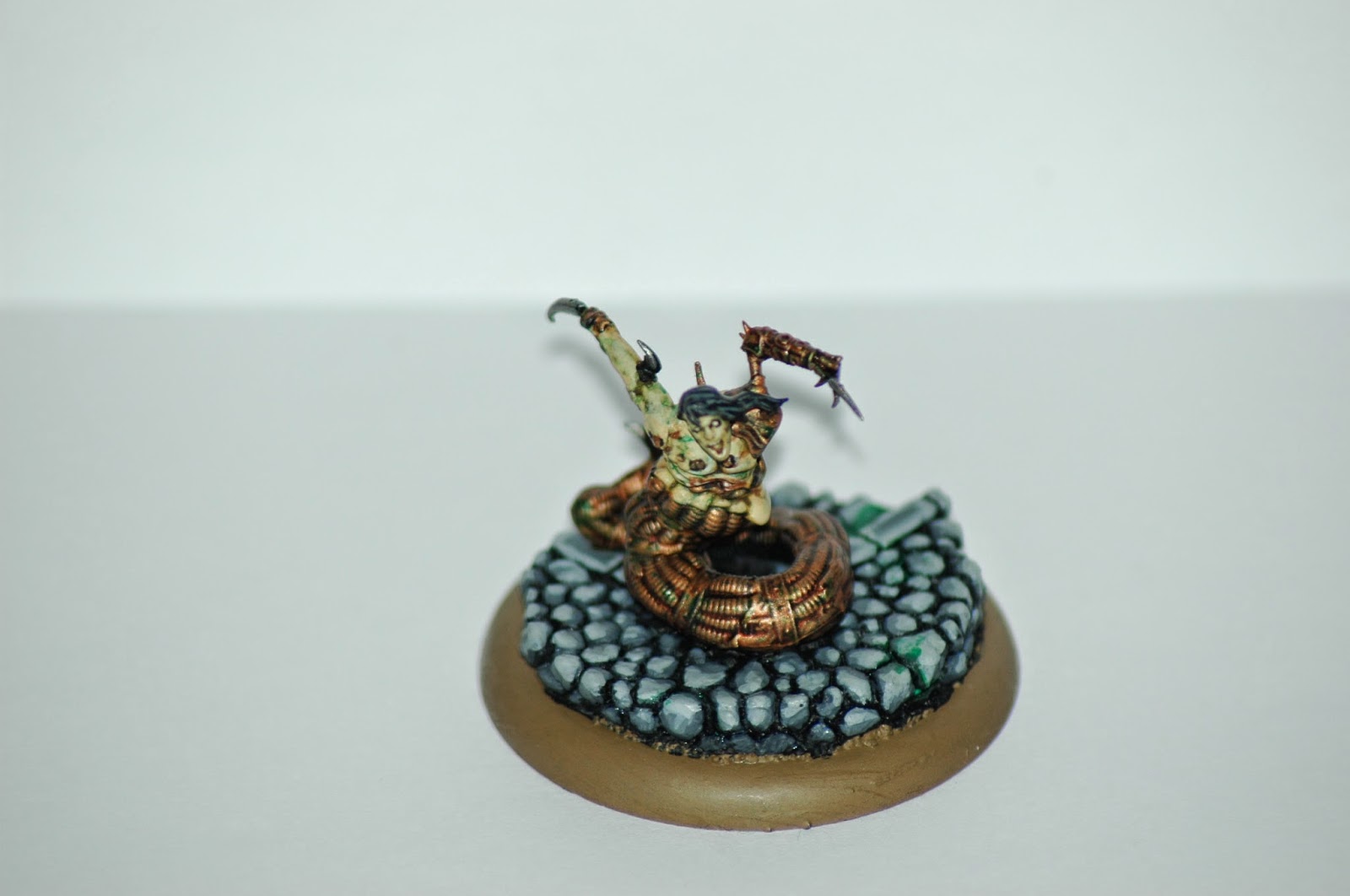 The main feature I wanted to bring out more on this model is the much bigger area of metal on this models snake like tail. I opted to give the snake tail a watered down gloss varnish after finishing my normal varnishing method. The gloss gives the tail a lightly more oiled look, though I think I might apply another coat at some point in the future to bring out the gloss a bit more. 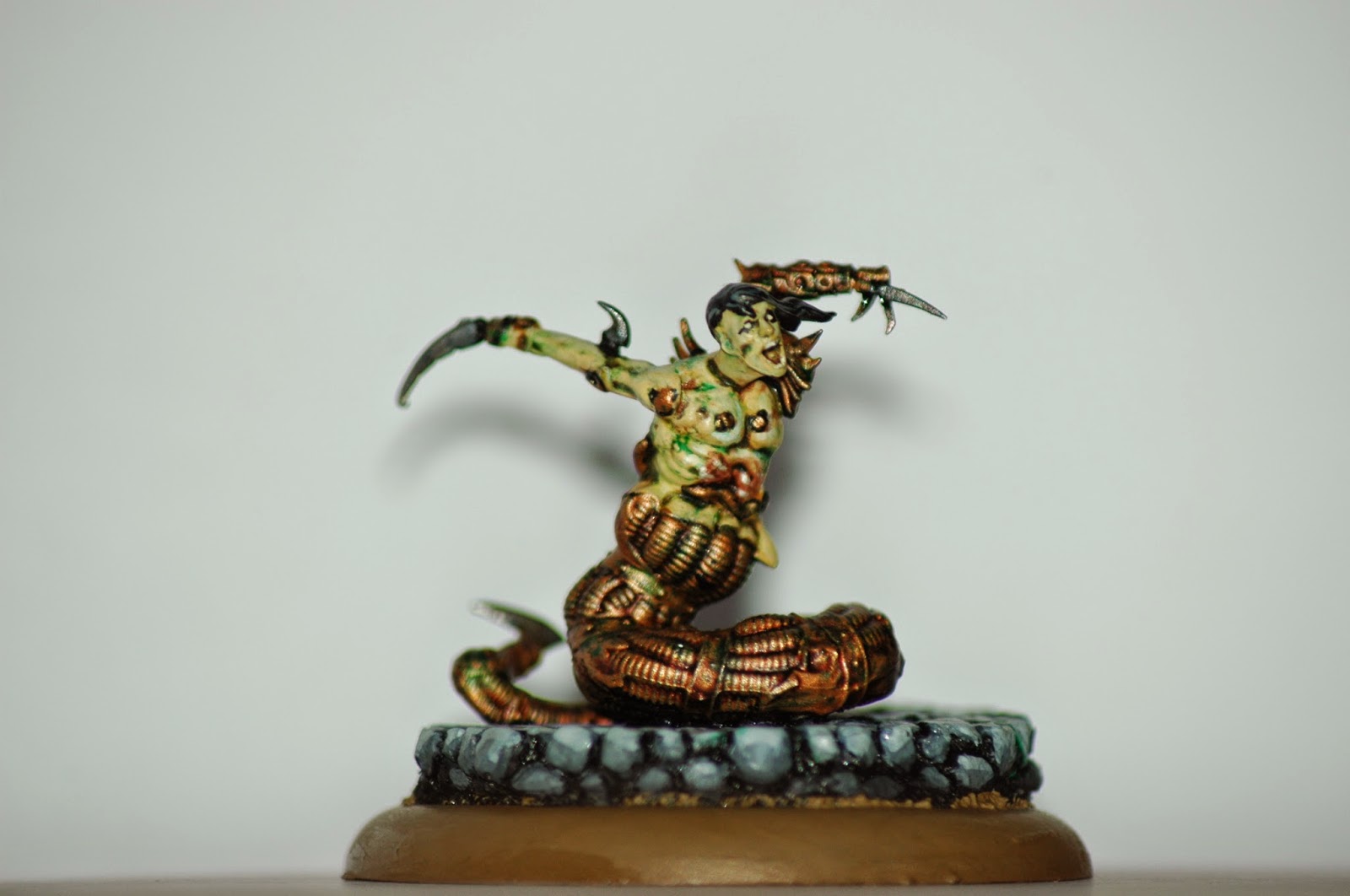 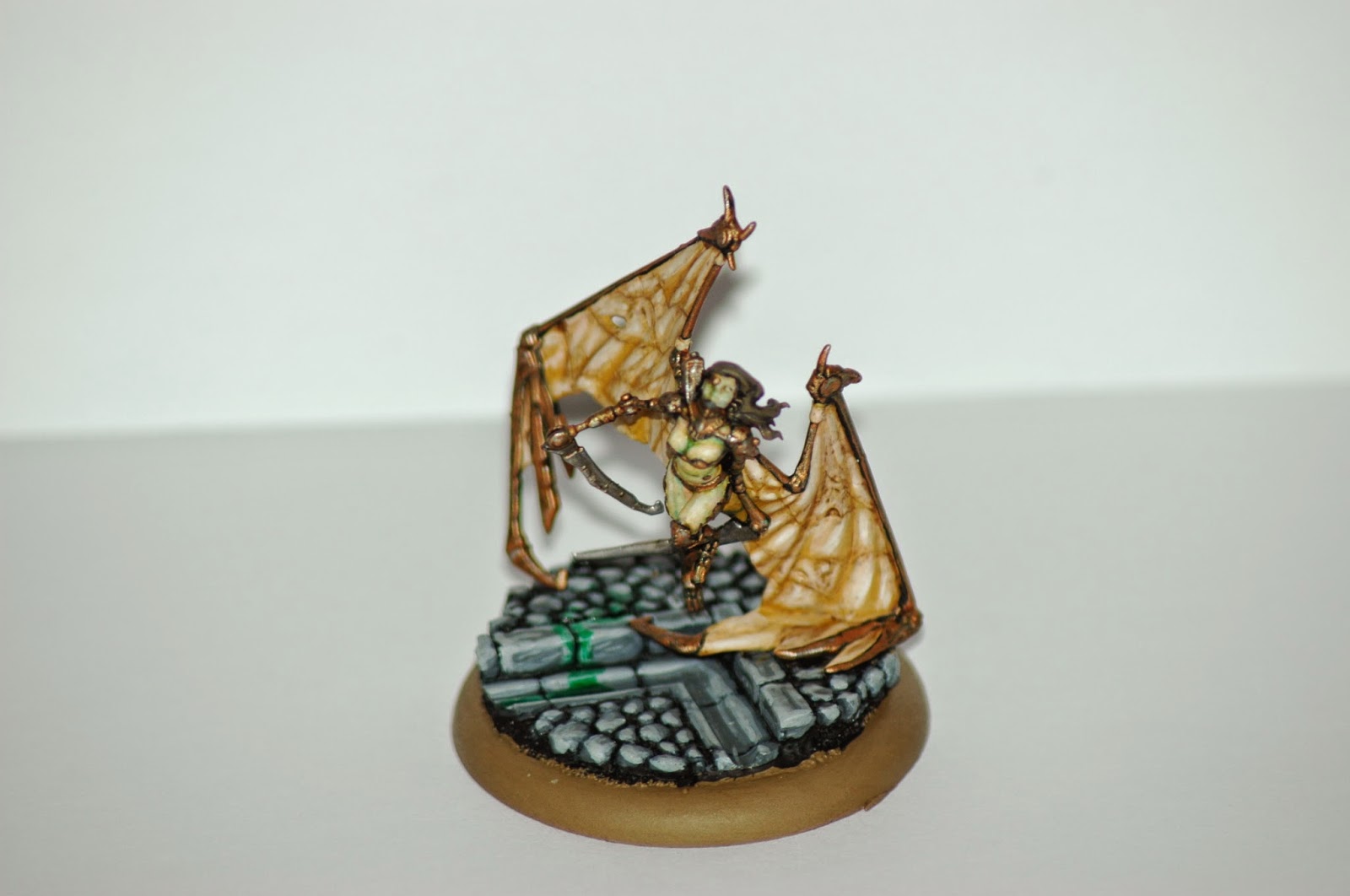 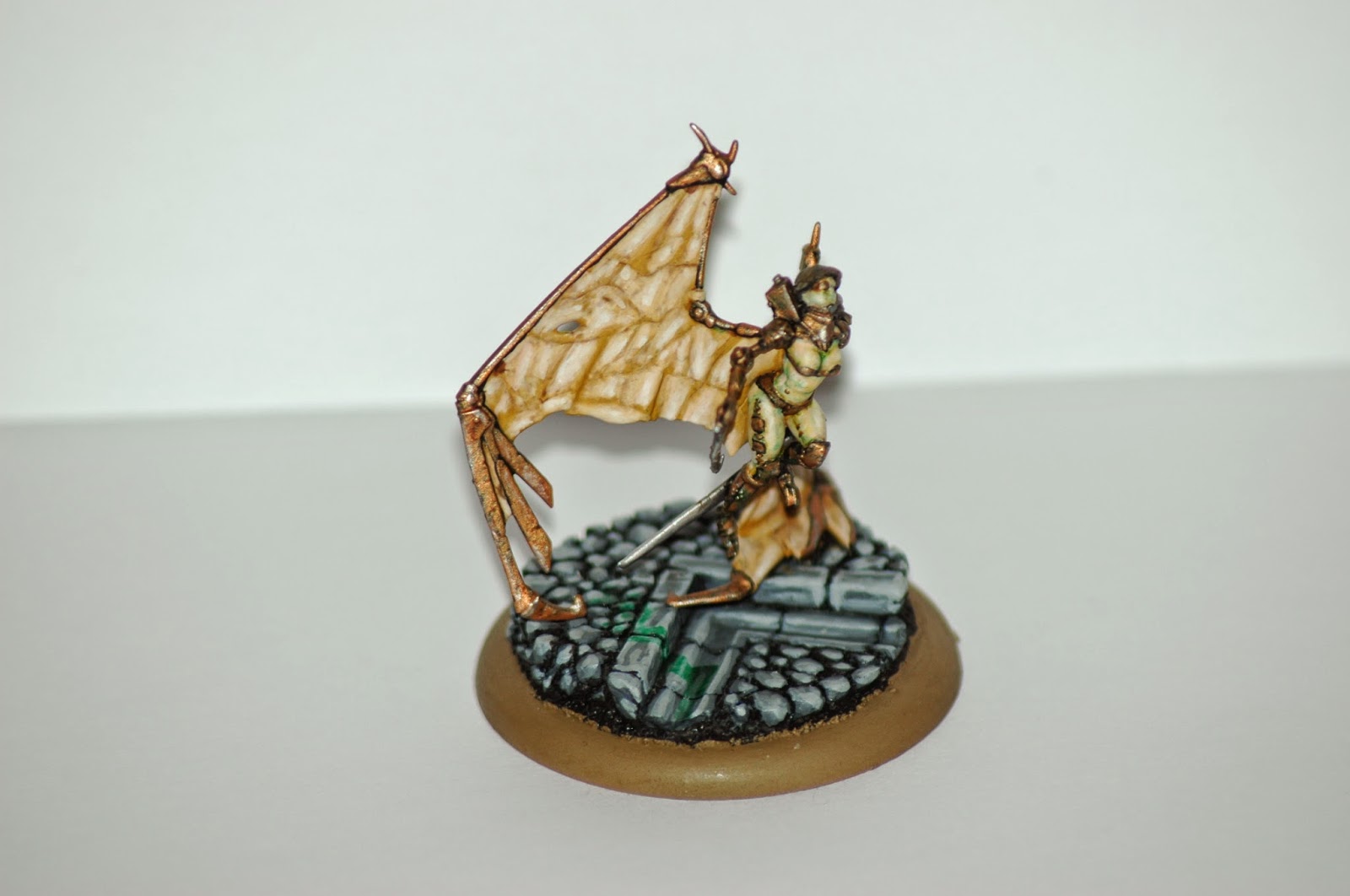 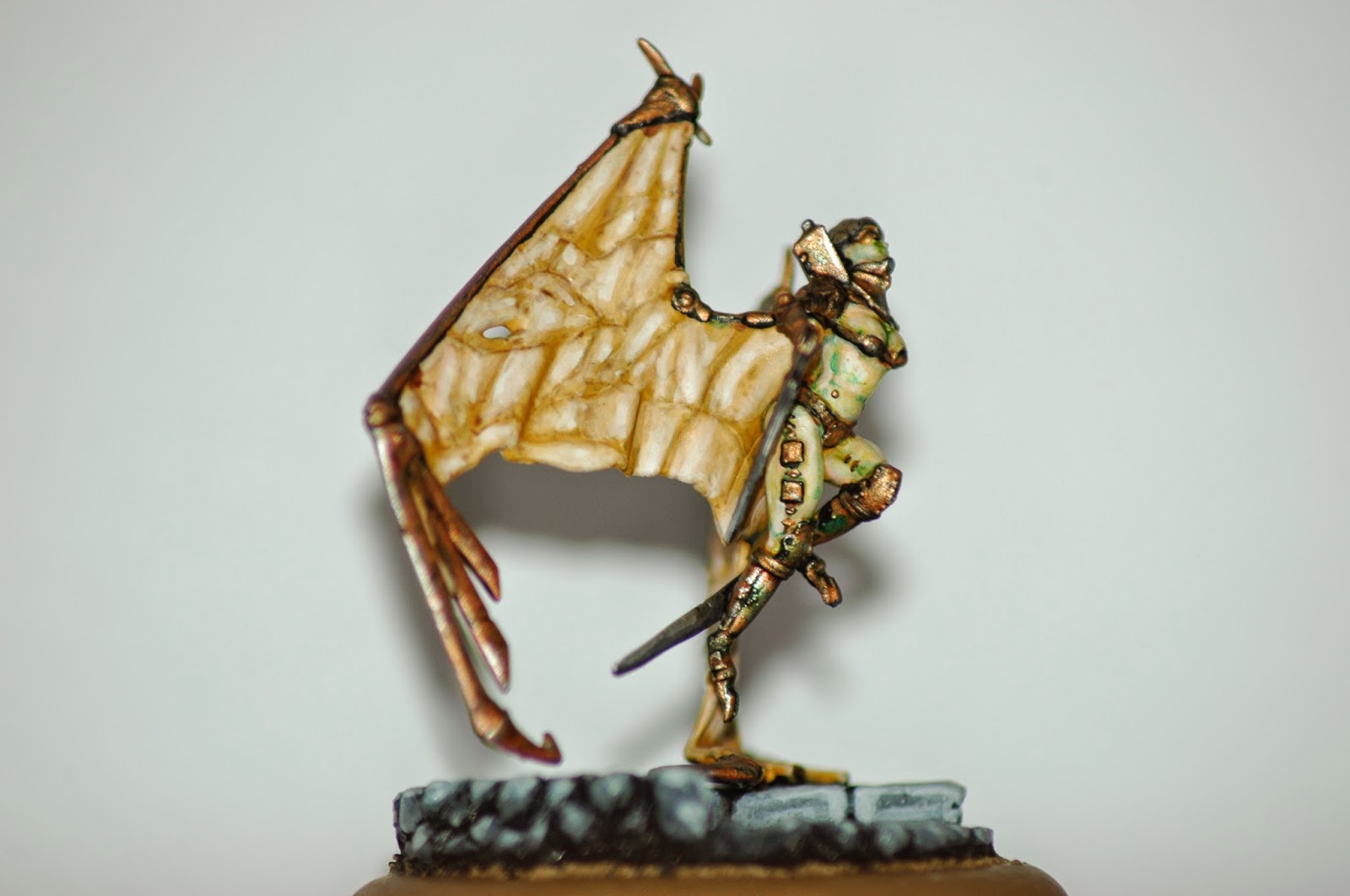 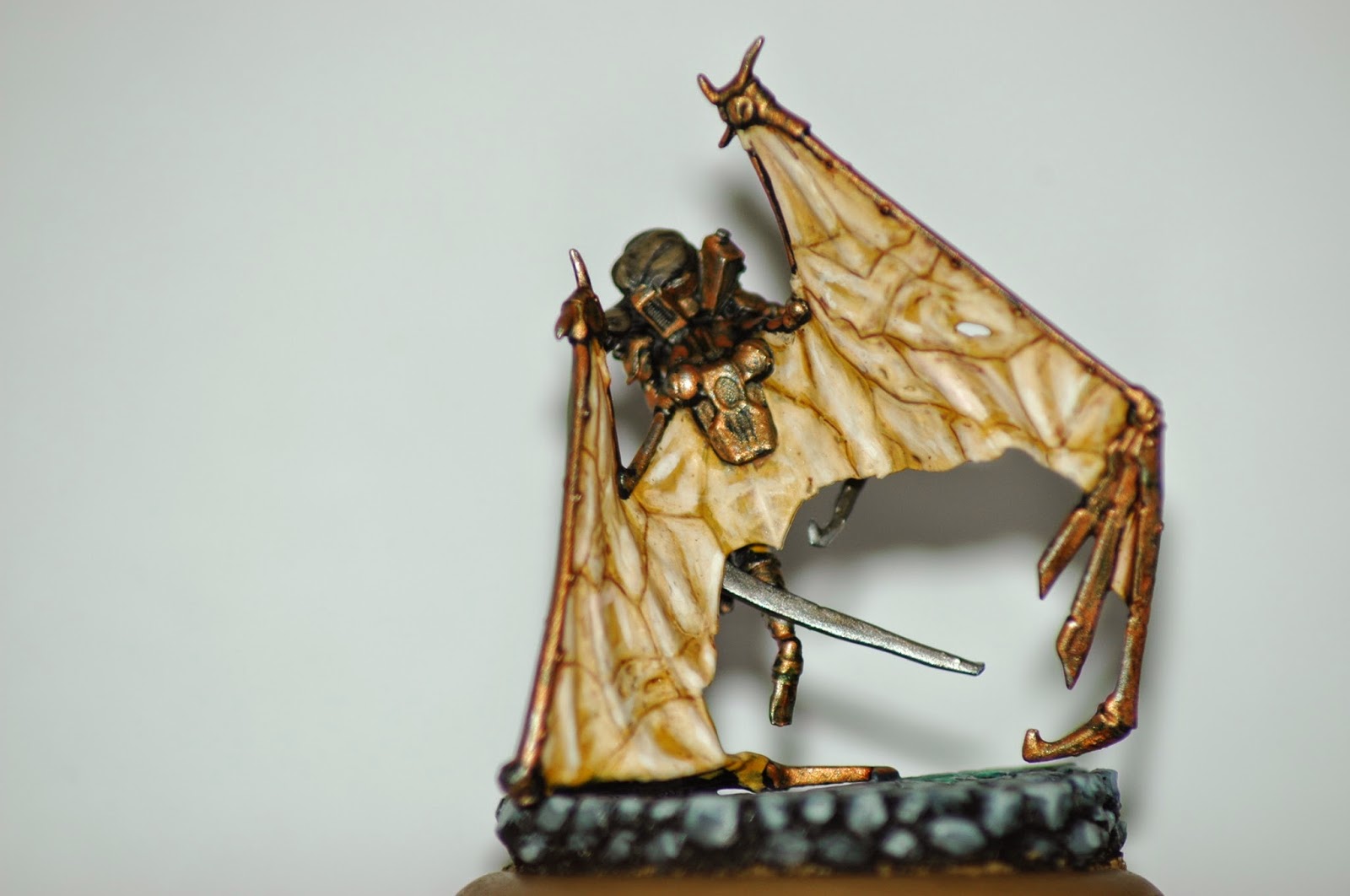 So thats the 'University of transmortis' box set done. I have also just finished  set of 3 'punk zombies' which I received for my birthday in January, which I will hopefully cover in my next blog post.


P.S. I was really pleased to see a new independent hobby store open in Derby city centre close to where I live in the UK who is stocking the Wyrd games range of models, along with various other game systems, Valejjo Paint (WOOOPPPEEEE) and other modelling/hobby supplies including scalectrics and model railway things.
Galactic models web page
and you can follow @Galacticmodels on twitter.